How Does EMF and 5G Affect Our Children?

WHAT DOES THE SCIENCE SAY ABOUT WIRELESS RADIATION AND CHILDREN?

Research shows that because of children’s thinner skulls, their developing brains, eyes and bone marrow absorb more radiation at a rate of three to ten times deeper than adults and it’s affecting them immensely.

In fact, a 2018 study found an impact to short term memory in teenagers who used cell phones to their head for just a year. Published research also links wireless exposure to hyperactivity, behavior problems damaged sperm, and altered brain development in the long term.

Researchers at the University of Toronto in 2017 reported for the first time that smartphone or tablet use before the age of 2 caused a delay in speech development. The 4-year study showed that for each 30-minute increase in handheld screen time, researchers found a 49 percent increased risk of expressive speech delay.

A child’s head’s absorption can be over two times greater than that of an adult, and absorption of the skull’s bone marrow can be ten times greater than adults. Therefore, a new certiﬁcation process is needed that incorporates different modes of use, head sizes, and tissue properties in order to understand these affects and how to mitigate them to encourage proper brain development in chidlren. 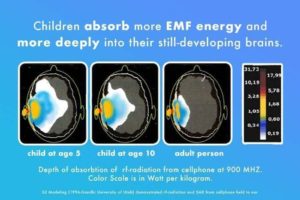 THE IMPACT OF CELL PHONE RADIATION ON THE BRAIN

Countless studies have been conducted which demonstrate the effects of cell phone radiation on young minds but has largely been ignored or simply not presented by those making laws regarding the implementation of cell towers before and after the creation of 5G.

University of California School of Public Health research found children exposed to cell phones before and after birth were more likely to have behavior problems than unexposed children (Divan 2008, Divan 2012).

The study to be published on 19 July 2018 found that cumulative RF-EMF brain exposure from mobile phone use over one year may have a negative effect on the development of figural memory performance in adolescents, confirming prior results published in 2015. Figural memory is mainly located in the right brain hemisphere and association with RF-EMF was more pronounced in adolescents using the mobile phone on the right side of the head. “This may suggest that indeed RF-EMF absorbed by the brain is responsible for the observed associations.” said Martin Röösli, Head of Environmental Exposures and Health at Swiss TPH. 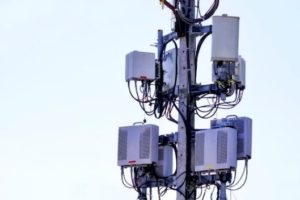 They found “a significant impairment in Motor Screening Task (MOT; p = .03) and Spatial Working Memory (SWM) task (p = .04) was identified among the group of students who were exposed to high RF-EMF produced by MPBSTs.

High exposure to RF-EMF produced by MPBSTs was associated with delayed fine and gross motor skills, spatial working memory, and attention in school adolescents compared to students who were exposed to low RF-EMF. Most notable is that the current FCC safety “guidelines” for 30 minute exposure are 1000 µW/cm2..  This FCC limit is 100 times more RF than the students experienced in the highest exposure group that showed cognitive decline and with non-thermal effects.

Physiological effects of millimeter-waves on skin and skin cells: an overview of the to-date published studies

What The Lack of EMF Research Really Means